Dog with a problem

Val was moving bricks from one side of our ruin to the other, but our dog Samwise kept making things difficult by trying to bite the wheelbarrow wheel.

Then he dropped his ball into the wheelbarrow.

Val ignored it and kept loading the bricks, and Samwise got more and more agitated as his ball disappeared under a pile of bricks. 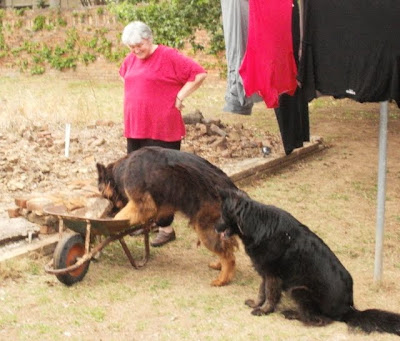 Eventually Samwise could take it no more, and started moving the bricks to retrieve his ball. Once he had it, he retired to a safe distance and looked repoachfully at those who would not throw his ball, but hid it under brioks.