I laughed when I saw the trailer of Cowboys & Aliens (2011) - IMDb the other night. It looked like yet an other B movie to watch for a few laughs when there is nothing else on TV. 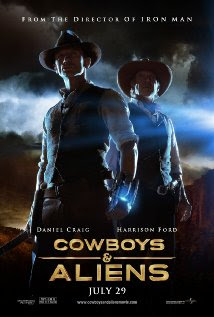 But actually it didn't turn out to be quite as bad as that. District 9 it wasn't, but it wasn't bad as a piece of no-brain-strain entertainment. And in the end we didn't even laugh at it. Though it was a blending of genres, unlike District 9 and Avatar, it didn't satirise either genre. It just combined them.

And it was the combining of the genres that seemed to make it worth blogging about. When I saw the trailer it seemed as if it would be anachronistic and a kind of "jump the shark" thing. Westerns are set in the 19th century, and space aliens are set in the mid-20th century, and that's where they belong, in human culture anyway. But if you think about it, if there are intelligent races from other planets or other galaxies, whiy should they visit Earth just at the time when we, or some of us, are culturally ready to think that they might? They could conceivably visit earth at any time. One could just as easily make a movie about Vikings and Aliens, or Aztecs and Aliens, or Julius Caesar's Alien wars. And then there are people who are convinced that the prophet Ezekiel was describing an alien spacecraft in Ezekiel chapter 1.
Posted by Steve Hayes at 22:44