Building bridges for the Gautrain

Just about every road in Gauteng is being dug up, widened or resurfaced, and if that weren't enough, a new railway line is being built between Johannesburg, Pretoria and the airport. One of the most spectacular pieces of construction is where it will cross the N1 highway at Centurion. 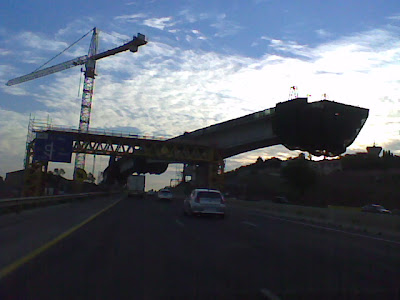 When the first railways were built in this part of the world about 120 years ago, President Paul Kruger of the South African Republic (ZAR) did not like Johannesburg, and so would not allow a direct rail link between Johannesburg and Pretoria, but only an indirect connection via Germiston. Now at last this is being rectified, but in the intervening 120 years most of the land in between has been built on, so the new line will be underground from central Johannesburg to Risebank, then on the surface through Midrand, and overhead through Centurion.

There is talk of it possibly being ready in time for the Soccer World Cup next year, though that will also push the cost up.

At the point where it crosses the freeway here, the freeway is also being widened from three lanes to four, though it seems unlikely that that will relieve the traffic congestion. But the road is also likely to become a toll road, and the toll will be about the same as the train fare, which will mean that only vehicles with two or more occupants will be cheaper than the train.
Posted by Steve Hayes at 21:25

That toll road and train fare plan sounds like an interesting way to reduce auto traffic. If it's cheaper to use the train, maybe fewer single passenger cars will be cluttering up the road and contributing to pollution. The USA could used an idea like this. But here no one will build mass transit infrastructure. Sigh.