A long time ago I wrote an editorial for a magazine called Ikon, which is reproduced below. It was for the Summer 1970 Issue (published in about January/February 1970) 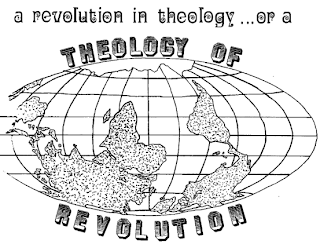 One hears much these days of the "New Theology". There is a great debate about God. Is God dead? Is he up there or down here or in here? And this debating makes the fundamental assumption that God can be known by talking about him. This seems to be especially affecting white Christian students in South Africa. There is a demand for a theology which is relevant to secular man. This demand was created by the theologians, and they are now doing their best to fulfil it by creating a god in the image of modern secular man.

But this demand for a modern secular God is the demand of a minority. Modern secular man is white, prosperous, and has the leisure to engage in theological debates. The 'new theology' is another product of Western neo-colonialist society, and for the vast majority of mankind this theology is totally irrelevant. They are not so much looking for a revolution in theology as for a theology of revolution.

For decades now we have been conditioned to think of a world divided into two opposing camps -- East and West. The East consists of "democratic" peoples republics, and the West likes to call itself the "free" world. This distinction has been fostered by power politicians to keep people ignorant, and to serve their own ends. The real division, however, is not between East and West, but between North and South. In the North live the haves, and in the South live the have-nots. Most of the wealth of the world is concentrated in the North -- Europe, Russia, North America. The bulk of the world's population, and the poorest, live in South Asia, Africa and South America.

The poor of the world are not interested in singing anthems to the status quo, as the secular theologians would have us do. They look to a God who changes things, who upsets the existing order. They look to a God who will depose the mighty and exalt the poor and powerless, who will literally turn the world upside-down, putting the poor south at the top in place of the rich north.

Theology is important, but the Church makes two great mistakes. The theologians are generally set apart from the rest of the Church. They engage in debates in a cosy academic setting, in the calm unhurried atmosphere of ripe scholarship. They throw away years of research into trivialities, which have nothing to do with the proclaiming of the Gospel of the Kingdom. And the rest of the Church suffers, because it has nothing to guide it. Christians go on doing things that were done by their forefathers, but they have no idea why their forefathers did these things, and therefore have no idea why they themselves do them. We need something more than academic theology -- we need applied theology -- a Christian ideology which can interpret events and forces in the world in the light of the Kingdom of God. Up till now they have been kept separate -- "Religion and politics don't mix".

Theology is important. And it is important that theology should be capable of application in the world in which we live. The 'Message to the people of South Africa' is the first step towards such a theology, but it must not be the last. It will be noted that the Message is not debate-theology. It makes a series of proclamations about what the Gospel of Jesus Christ is. To the academic or the secular theologians this is arrogant. One cannot make proclamations, one can only make a tentative contribution to the debate. But the world does not have time for drawn-out debates. We have to act on the answers to these questions now. To the Christian theologian there is only one relevant question -- What is the Gospel of Jesus Christ? To the Christian activist, only one course of action is open -- proclaim the Gospel, and make visible God's revolution in the world.

Perhaps Abraham is a good model for theologians, and for all Christians. Abraham was not seeking a way -- he was on the way. He was aware of direction, but not of his ultimate destination. He did not know what the promised land was to be like; all he knew was that God was leading him there. It is important for Christians to know where they are going, for they cannot be effective otherwise. We should stop playing around with ideas around an abstract God, and rather concentrate on where God is leading us. Action which is not based on sound theory is what the Marxists call adventurism. For Marxists all action must be directed towards a goal -- the revolution and the classless society. For Christians likewise, all action and theologising must be directed towards a goal -- the revolution and the Kingdom of God.

Well, that is ancient history. It was written more than 37 years ago. The world has changed then, and I have changed. If I were writing it now, I would not have written it in the same way, and would be more aware of how I have allowed myself to be caught in the trap of academic theology. But it is worth asking what has changed? What has remained the same?

Some answers may be found in an article mentioned on another blog, Believing in the Global South, by Philip Jenkins. Jenkins says

some western Christians have since the 1960s expected that the religion of their Third World brethren would be fervently liberal, activist, and even revolutionary, the model represented by liberation theology. In this view, the new Christianity would chiefly be concerned with pulling down the mighty from their seats, through political action or even armed struggle. All too often, though, these hopes have proved illusory. Frequently, the liberationist voices emanating from the Third World proved to derive from clerics trained in Europe and North America, and their ideas won only limited local appeal. Southern Christians would not avoid political activism, but they would become involved strictly on their own terms. While many espoused political liberation, they made it inseparable from deliverance from supernatural evil. The two terms are indeed related linguistically and often appear together in biblical texts, but the juxtaposition of the two thought-worlds of liberation and deliverance seems as baffling for many Euro-Americans as it is natural for Christians in the Global South.

The last part was obvious to me when I first went to study theology in England in 1966. The first essay I was asked to write was on "Jesus and the demons", and when I had finished reading it to the college principal he said, "But you haven't told me whether you think demons exist or not." I replied that I didn't think it was important. When you have been run over by a bus, you don't think to ask philosophical questions about the existence of a bus. Coming from South Africa, I was aware of our conflict being against principalities and powers, which were bigger than Mr Vorster's flesh and blood security police, but nevertheless inextricably linked with them. One of the things I find interesting is that this kind of thinking is beginning to penetrate Europe as well, if the film Pan's labyrinth is anything to go by (see review in an earlier post). Whether the director is a Christian or not I don't know, but his vision seems far more in tune with the South African experience of the 1960s than the Western secular theology of the 1960s ever was.

Actually Jenkins is a bit off the mark when he said "some western Christians have since the 1960s expected that the religion of their Third World brethren would be fervently liberal, activist, and even revolutionary, the model represented by liberation theology." That kind of liberation theology only penetrated the consciousness of Western theologians in the 1970s. In the 1960s they were too busy uttering paeans of praise to the status quo. Liberal theology led to conservative politics and vice versa. As G.K. Chesterton put it: the modern young man will never change the world, for he will always change his mind. Western theologians were concerned to change their theology to fit the world, and the last thing on their minds was to change the world to fit any theological vision. They wanted a revolution in theology, not a theology of revolution.

But for the most part Jenkins gets it exactly right. Over the last 37 years the differences between Western and African Christianity have become clearer. Neither is monolithic, of course, and Jenkins points this out. But if we want to know what Christianity will be like in the 21st century, Africa rather than Europe or North America will be the model. One question, however, may be whether South Africa will continue to fit that model. South Africa is becoming increasingly secular. People have long said that South Africa is both "First World" and "Third World". Outmoded as such Cold War terminology may be, there is nevertheless some truth in it.
Posted by Steve Hayes at 01:42

That's right on. I think the West is finally beginning to wake up to the fact that the strength of the Church is shifting south. The trend will only increase in coming years. It is high time we seek to come to terms with this reality all seek together, North and South, to further the Kingdom throughout the world.