by Steve Hayes, Kilner Park in the Great City of Tshwane

Up at 1:01. The beginning of the strict "stay at home" disaster regulations. I can still hear traffic on the highway, though. I did more work on the Cowan family history and sent a descendant chart from Henry Cowan off to Peter Waddell who had written to ask about it a few days ago, At about 3:30 Pimen started barking. I looked out of the window but saw nothing. Later on our Neighbourhood Watch WhatsApp group someone reported seeing a hooded figure at their gate. They phoned Kilner Park Security, who in turn phoned the cops, who came and arrested the bloke. Presumably he'll be charged with breaking cufew. Later Val said that when Pimen's barking woke her she looked out and saw someone walking up Slater Street, but couldn't tell whether he was a hoodie or not.

Then went back to bed after feeding Pimen at 5:45, and slept again to 9:30. Now there is deep silence from the highway. Since Jethro is home from work I made us both Oats-so-Difficult for breakfast. I asked if we could use his drone to have a look at the traffic on the highway, but he'll have to charge the battery first. There seem to be fewer trains than usual. Eskom says there will be no load-shedding during the "lockdown" -- I'm still not very happy using that American prison term, but I suppose it's not much different from saying that we are all under house arrest.

Towards mid-morning the traffic on the highway picks up and there are lots of vehicles passing. It's the N1, so the main road to the north, three lanes each way, The trains seem to have stopped running altogether. The line across the road is the main line to the east, ending at Maputo. Normally there are 2-3 suburban trains an hour, going to Mamelodi, and several goods trains, going further. Today, nothing. How do essential workers get to work?

Val is watching cricket, matches from 11 years ago, which she recorded, when South Africa was touring Australia. Even if there were live cricket today we couldn't afford to watch it, because it's only on the most expensive channel. That's the trouble with retirement. Before you retire you have the money but no time, but once you are retired you have the time but no money.

Then the water pressure drops, and suddenly the Neighbourhood Watch WhatsApp group is filled with messages again. It's off in this street, it's off in that street. I recall that a couple of days ago someone reported a water leak up at the Casbah Roadhouse. perhaps the municipality has sent someone to fix it, the trouble is now no one can go up there to see if that is indeed the case. That gets someone else into a tizz -- surely that is an essential service? Why don't they fix it? But that's not what I said; I didn't say they couldn't go to fix it, I said we couldn't go to see if that's what they are doing. Simon brings in a whole lot of water containers so that we can fill them just in case there is a more serious problem with water. The containers are a relic of a few years ago when Jethro hired a trailer and drove down to Senekal in the Free State with 2000 litres of water when they were having a drought there.

I spent the afternoon reading The Horsemen, by Joseph Kessell, a novel set in northern Afghanistan before all the recent wars there. Come 4:30 and the rush hour, and the highway is quiet again, virtually no traffic passing. Another text message from a friend -- a warning from the dustmen -- wipe your dustbin handles with soap and disinfectant. We handle 2000 bins a day. Yet another vector for the virus.

We had supper, Gold Dish vegetable breyani from a tin. Thank God it's available again. For a long time one never saw it in the shops. Then at 7:00 we watched the "Pointless" TV quiz show, as is our custom, even though most of them are re-runs. When it ended at 8:00 Simon went out to see what Pimen was barking at, and it turned out to be a rat sitting on top of the fence. How it got there I can't imagine. Perhaps Pimen chased it there, and it has gecko feet. As we were going to see it, however, we noticed what seemed to be a fire to the north-east, over the railway line, where there is a scrapyard and the Koedoespoort railway workshops. I checked the WhatsApp neighbourhood watch group, and since no one else had mentioned it I did. Val phoned the fire brigade, and they said they already had a vehicle at the scene of the fire. 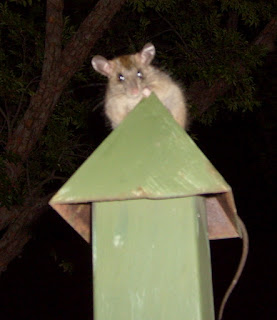 The rat on the fence was a brown one, and I took a photo of it. When Simon mentioned it I thought it might be an imbiba, but I couldn't see its back to make sure. It just perched there and looked through its beady little eyes and wiggled its rounded ears. I wonder -- isn't it brown rats that carry bubonic plague? Is its appearance a sign that if COVID-19 doesn't get us, bubonic plague will?

We went back inside and watched an episode of "Silent Witness" on DVD, and at about 9:00 pm went outside again to look at the fire. It was much bigger now, with smoke streaming away to the west, and occasional sirens heard. Will we ever know what it was? We can't go out tomorrow and buy the newspaper. Will they even be printing newspapers if no one is able to buy them, and the sellers can't appear on the streets? Perhaps the corona virus will be the end of print journalism.

We watched the second half of the "Silent Witness" episode, and at the end of it, about 10:15, the fire was still burning, the smoke was still streaming, and the smell was worse than it had been earlier. And so to bed, as Samuel Pepys would have said, and the evening and the morning were the first day of the lockdown.


______
A group of us are sharing notes, observations and extracts from personal diaries relating to the COVID-19 epidemic. If you'd like to know more about this, and perhaps join in, or start something similar of your own, see here  Notes from underground: Physical Distance and Social Proximity in a time of plague