Amatomu have recently began revamping their web tracking, and are offering several new statistical comparisons. I'm not sure how accurate they are yet -- one of the popular posts on this blog, Books to read before you die, dropped from most popular to zero reads the moment Amatomu brought in their new tracking system, whereas other trackers show that people are still reading it, so I think there are still some teething problems with the new systems.

But they are still interesting, nevertheless.

One of the new indicators is the countries people come from to read blogs, and I found it interesting to compare this blog with Khanya (my Wordpress general blog) and with my Family History blog.

The MyBlogLog widget shows that most of the recent readers of this blog are from the UK. So I thought I would compare the Amatomu statistics. 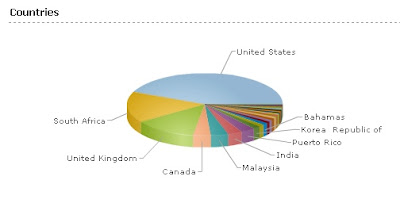 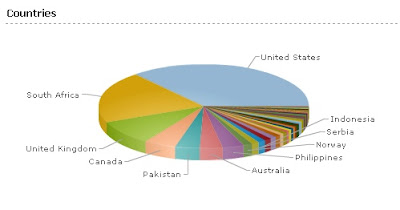 The family history one seems to have a higher proportion of visitors from Australia and New Zealand, which don't feature on this blog.

I suppose that can be explained by having several recent posts on the Sandercock family, many of whom emigrated from Cornwall in the UK to Australia and New Zealand.

Khanya recently had a lot of visitors from Pakistan, which doesn't feature in the statistics for the other two. I suppose that could be explained by a recent article about the use of Allah as the name for God, and Pakistan having a large Muslim population. But there is a discrepancy: the article was mainly concerned with a law in Malaysia prohibiting Christians from using "Allah" as the name for God in their publications. Why then do more Malaysians apparently feature as readers of this blog, rather than the other one? Could it be that Pakistan is planning a similar law, thus arousing more interest there than in Malaysia, where the law has apparently been in force for some time?

I'm also interested in Amatomu's statistics about other things. In the two general blogs, this one and Khanya, Firefox is the most popular web browser. In the family history one, Internet Explorer is. I suspect that that is because family historians are less interested in computers for their own sake than most blog readers. For family historians, computers are primarily a tool and a means to an end, so they accept the default web browser that comes with their computer, as long as it works. Only when things go wrong will they look for something else. Other blog readers are perhaps more technically minded, and compare different kinds of software to find something they like.

Another interesting thing is the cities from which readers come, but I'll save that for a post on the Khanya blog, where the WordPress platform handles graphics better than Blogger.
Posted by Steve Hayes at 06:31

The question is - how many stats do we need?