The Brothers Karamazov by Fyodor Dostoyevsky


Having just finished reading it for the third time, I up my rating from four to five stars. It took me three readings to really appreciate this book. Perhaps in part that is because it is a long and complex book with many characters and incidents, and it took me three readings before I could hold them together enough to follow the thread of the story properly.

I began re-reading The Brothers Karamazov this time partly because I had recently finished Resurrection by Leo Tolstoy, and wanted to compare them, and partly because I wanted to check on Dostoevsky's alleged views on Christian socialists (which turned out to be very different from what was alleged). I have dealt with those points in a blog post here Notes from underground: Dostoevsky and Tolstoy on Orthodox Christian worship.

Tolstoy was clearly the "woke" Russian author of his time, with a passion for justice. So he embarks on a crusade against against the injustice of the Russian criminal justice system, probing its weaknesses -- the fallibili8ty of its judges and judgements, the cruelty of its prisons, and so on.

Dostoevsky does not do this. He just describes, and lets the reader decide. 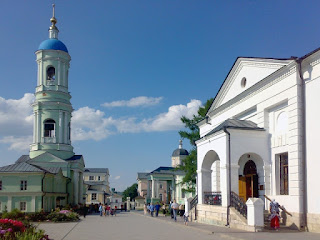 The Brothers Karamazov is, on one level, a crime novel, a whodunit. It is also a courtroom drama. It is also a love story, where the eternal triangle becomes the infernal pentagon. But it is also a story of resurrection and love and and reconciliation. And this is what shines through the character of the youngest Karamazov brother, Alyosha, whose love and goodness leads others to love, who leads schoolchildren and members of his own family to the beginnings of forgiveness and reconciliation where there had previously been hatred and enmity.

I am grateful to all the Orthodox priests of my acquaintance who, ignoring the rubric that says some prayers should be said by the priest sotto voce, have said aloud the prayer from the Liturgy of St Basil that contains the phrase "Preserve the good in goodness and make the evil be good by Thy goodness", for that is the main message of The Brothers Karamazov.

View all my reviews
Posted by Steve Hayes at 13:32

It's an irony that Book 5 (or at least the Grand Inquisitor portion thereof) is sometimes published by itself, or discussed as if it were a separate work -- without Book 6 "The Russian Monk," which Dostoevsky intended as an oblique answer to Ivan's "legend," and which is a wonderful piece of work, perhaps in some ways a last testament from Dostoevsky.

The Brothers Karamazov is my all-round favourite novel. I've only read it completely once, and portions of it several times. I think Dostoevsky addressed just about everything in the human condition in this novel, and that's why I like it so much-you name it, it's in there: life, death, love, hate, faith doubt, suffering, joy, atheism, God, good, evil, and so on.