I'm getting tired of this 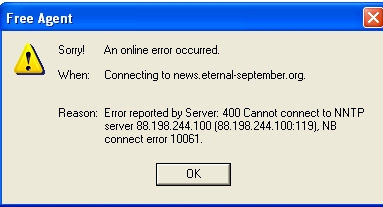 I'm getting tired of this.

For the second day in a row I've lost all Internet access from my desktop computer. No mail, no news, no web.

Oh, and it's also works fine on the same machine when I boot it into Linux Fedora 14, so it's not a hardware problem, or an ISP problem, and the mice haven't chewed through the Ethernet cable.

It's a Windows problem.

And the only change I've made to the system since Sept 8 was to install an update of Avast antivirus.

Is anyone else having similar problems?

Any ideas what might be causing this?
Posted by Steve Hayes at 18:28

I have identified the culprit - I restored the C: drive from a back up. All worked well until I upgraded the Avast antivirus program from version 6.01203 to 6.01209. Internet access was blocked, and it wiped out all my system restore points. Avast now IS a virus, or at least it behaves exactly like a virus. I'm typing this on my laptop while waiting for the C: drive on my desktop to be rerstored again, for the second time in 2 days.