Into an Old Room: Edward FitzGerald

Into an Old Room: The Paradox of Edward Fitzgerald by Peter De Polnay


Peter de Polnay lived for a couple of years in a house that had once been occupied by Edward FitzGerald, a minor Victorian literary figure known mainly for his translation of the Rubáiyát of Omar Khayyám, which I haven't read. I'm not even sure how it got on our shelves, though I suspect that my mother may have bought it an auction about 65 years ago. But in this time of "social distancing", when bookshops and public libraries are closed for fear of the corona virus, I've been scanning our bookshelves at home for books I haven't read, or might want to read again.

FitzGerald was a country gentleman of independent means, and so had the leisure for literary pursuits, and some of his friends and contemporaries, like Alfred Tennyson and William Makepeace Thackeray, achieved more literary fame than he did.

Perhaps the best comment on FitzGerald comes from Tennyson's son Hallam, who wrote after a visit to FitzGerald in his old age,


The views that Fitz expressed to me on literature were original and interesting, but the old man never got off his own platform to look at the work of modern authors. He had always wanted men like Thackeray and my father to go along with his crochets, which were many. He had not been carried away by their genius out of himself and out of his own of Cambridge critical groove, and had not, like them, grown with the times...


Into an Old Room is not really a biography, however, but rather a criticism of biographers for portraying FitzGerald as a less interesting character than de Polnay thought he was.

I am learning some things from it, one of which is that I am gaining an inkling of the meaning of the word "snob". I had never really understood it properly. At school we used it of a person who held himself aloof from others and would not speak to them, because he thought them beneath his notice. My friend John Bolton used the word in that way, and so he taught it to me, and it meant someone who had withdrawn into a slightly offended silence. Then at the University of Natal we had English writing classes and Professor Christina van Heyningen asked our group to come up with definitions of a snob, a prude, a prig and a bourgeois. I was reasonably clear about the last three, but found it difficult to grasp the meaning of "snob". It clearly meant more than simply retreating into an offended silence. I got even more confused when Sir Garnet Wolseley (in his diary) referred to my great great grandfather, Richard Vause, as "an offensive snob", who like most of those he had met in Durban, was inclined to be "weak in his aitches". Rather than being offended, it seemed that snobs were the ones who gave offence. Now I read Into an Old Room and it describes Thackeray as a snob because he liked rubbing shoulders with those of high social status. When someone invited him to dinner, he couldn't go because he had promised to go home, and the person who invited him thought he had turned it down because there wasn't going to be a lord there. At last I begin to get the idea. But some years ago I bought a book on a sale, homing to gain enlightenment on the topic. It was called The Book of Snobs, but unfortunately it was by none other that William Makepeace Thackeray. No wonder I was confused.

Another word I leaned about from reading this book was "crotchets". I was rather surprised to learn that a "crochet" means "a whimsical fancy". I  know of the word as referring to musical notation, or a kind of knitting with one needle, and tended to think of it in this context as meaning something like a pet peeve, from association with the adjective "crotchety". But a whimsical fancy is something different.

A third thing I learned fits with my missiological interests. Peter de Polnay observed that in late Victorian times the Rubáiyát of Omar Khayyám seems to have been regarded as the agnostic's Bible. De Polnay noted:


It is, I believe, less read today than it was twenty years ago. Too many people have quoted it for their own purposes and too many ribbons of too many colours have been attached to it. It might at some not quite distant date find a temporary obscurity. The trend today is towards Christianity, the stand-by of troubled ages, and nowadays, having so proudly strayed from it, man finds himself an a pretty deep morass. The cross in a Scottish mist will become preferable to the sun on the Ganges.

De Polnay was writing immediately after the Second World War, when it had become rather more difficult to believe in the perfectibility of man by secular means. 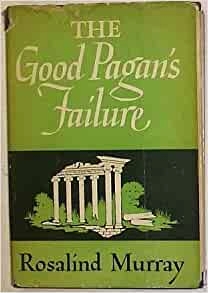 Another contemporary book, long out of print, that dealt with that theme in more depth, was The Good Pagan's Failure by Rosalind Murray. I wonder whether, in this age of the corona virus, we might see such thinking come full circle again.

I'm not sure if the Rubáiyát of Omar Khayyám experienced an increase in popularity as World War 2 faded from living memory but if the decline of Christianity in the late 19th and early 20th century was fuelled by works like Rubáiyát giving expression to popular agnosticism, its decline in the late 20th century was fuelled by Christians themselves, who hi-jacked the charismatic renewal of the 1970s contextualised to fit the secular neo-liberal ideology of the 1980s, by producing the prosperity gospel, which has profoundly influenced the popular image of Christianity. So as we enter another troubled age, perhaps Christianity will make a comeback, if it can be found among the dross.


View all my reviews
Posted by Steve Hayes at 14:37