Love in a time of dictatorship

Of Love and Shadows by Isabel Allende


A love story in the grim shadow of a military dictatorship. Though she names no names Isabel Allende makes no attempt to disguise the setting, Chile under the dictatorship of Augusto Pinochet, who came to power in a military coup on 11 September 1973 and remained in power for 17 years.

It is also the story of three families. Irene Beltran, whose mother runs an upmarket old-age home, has had a privileged upbringing, and is a journalist on on a women's magazine. She goes to write a story with photographer Francisco Leal, whose family background is very different; his parents were exiles from the Spanish civil war, and their three sons are far more politically aware. One of Francisco's brothers is a priest who works in a poor slum parish, and he himself had been involved in a radical political group when he was younger, though at the time of the story his political activities are more discreet.

Francisco and Irene go to cover a story on a young girl whose fits are reputed to produce miracles, and that is the beginning of their growing attraction for each other. The girl, Evangeline, has a brother in the police, whose senior officer is humiliated when he tries to arrest her, and she soon joins the ranks of the "disappeared", those who were taken into police custody and were never seen again. Irene and Francisco get drawn into a search for Evangeline and the other disappeared, several of them from her family, a search that becomes increasingly dangerous. 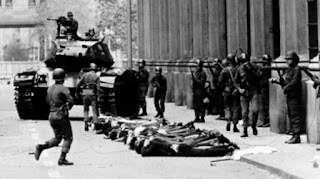 Isabel Allende was in Chile in the time of the coup, and was related to the democratically-elected president Salvador Allende, who was overthrown in the coup, so writes of the dictatorship from first-hand knowledge and her descriptions of life under a military dictatorship are amazingly authentic, and bear a remarkable resemblance to life in South Africa and Namibia under .apartheid. So much sounded very familiar indeed.


View all my reviews
Posted by Steve Hayes at 19:31