Set in 1950s racist America, this is magic realism at its best.

The title is slightly misleading; it might lead one to expect a pastiche of Lovecraft and the Lovecraft school of horror, but though the story begins with a journey to Lovecraft country , its style is altogether different. I don't recall seeing a single "eldritch". Most of the action takes place in and around Chicago, with a couple of side trips to distant galaxies and supernatural realms.

Atticus Turner, his uncle George Berry and friend Letitia travel to the Lovecraftian town of Ardham in Massachusetts where they discover that Atticus's father is being held prisoner by a coven of white occultists. George is a travel agent, and editor of The Safe Negro Travel Guide, and it soon becomes apparent that it is safer for Negroes to travel to the farthest reaches of the galaxy or to demonic realms than it is on the roads of 1950s America.

Most of the main characters are related to each other, and even to the chief villain, Caleb Brathwhite, a white man with ambitions to become the chief witch in America.

View all my GoodReads reviews

Going beyond a review of the book itself, however, there is also the social milieu in which it is written and set.

Two years ago we saw the film Black Panther, which featured a black comic-book superhero, and it sparked several discussions at the time. Comic-book superheroes were a product of America of the 1930s, and probably reached their zenith in the 1940s and 1950s. But at that time the characters in them were all white Americans. Lovecraft country shows that in that period there were many black Americans who enjoyed reading about comic-book superheroes with science-fiction type powers, and Lovecraft-type horror stories, dealing with supernatural powers. But all the characters were white.

This book depicts black fans of such literature, in the social milieu of the time, who then themselves have the kind of adventures depicted in the superhero comics and in Lovecraftian stories. In my review above I said that if you liked Neil Gaiman, you would probably like this book. I'll extend that by saying that if you liked Black Panther the movie you'll probably also like this book. 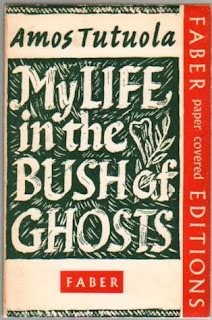 In the 1950s, when Lovecraft Country is set, black American fans of such literature were on the outside looking in, but what about Africa? African culture is different from American culture, and most of the literature of that kind that we have to read is from overseas somewhere. I was once reading The Lion, the Witch and the Wardrobe to some black South African children, and there were many foreign cultural references that needed to be explained. The only African literature that seems to me to be comparable is Amos Tutuola's My life in the bush of ghosts, but I think that is more for adults than for children.

But I'd be interested in seeing this kind of magic realism in southern African literature, in books for both adults and children.
Posted by Steve Hayes at 05:52