King Arthur In Legend And History by Richard Barber
My rating: 4 of 5 stars

This is the second book on Arthurian literature I've read in the last month, and since I read them so close together, I can't help comparing them. The first one was King Arthur: the True Story, and you can see my review here.

This book is the earlier one (first published in 1961) and in my opinion the better one, though it gets a lower rating on GoodReads, perhaps because of the limitations of the 5-star rating system. In a 10-star system I would give King Arthur in Legend and History 7 stars, and King Arthur: the True Story only 6.

The books start at opposite ends of the story, and work in different directions.

King Arthur in Legend and History starts with what is known of the historical Arthur, and then follows the development of the legend in literature. King Arthur: the True Story starts with the developed legend, and works back towards the history. That is because its main purpose is to present its candidate for the true historical Arthur, and so, apart from a general survey of the literature at the beginning, its main argument is directed to that end.

Richard Barber, on the other hand, shows how scanty historical sources led to the growth of a rich literary legend. On the whole, I liked his book and his approach better. He also deals much more thoroughly with the later Arthurian literature, which is of little interest to anyone looking for clues to the historical Arthur. He also gives quite a bit of space to one of my favourite authors, Charles Williams, though he concentrates on his poetry, and not on his prose narratives.

Barber compares most of the major Arthurian writers, and compares the way in which they presented the stories and the characters, and also how people in different periods tended to present them differently.

I'm almost more interested in the history of the literary treatment of the legend than I am in the legend itself. For one thing, King Arthur himself seems to play very little part in the stories. Other than at the beginning, where he becomes king, and the end, with his rather enigmatic end, he seems to do little except announce that he will fast until one of his knights has an adventure and comes back to tell him about it. And the rest is the story of the adventure of this or that knight -- adventures that often seem to involve murder or adultery or both.

One of the things I find most interesting, though, is the story of the Holy Grail, or Graal. This was introduced to the Arthurian story by Crétiene de Troyes about 1190, though he does not describe it in detail. Within ten to fifteen years (about 1200-1210) Robert de Boron had expanded this narrative, and the Graal had become the cup used by Christ at the last supper. brought to Britain by Joseph of Arimathea and taken to Avalon by Bron the Rich Fisher. 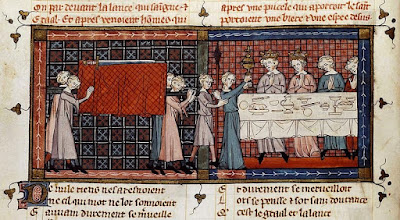 I don't think that it is mere coincidence that this was the very period in which the word "transubstantiation" was introduced into Western theology to explain the transformation of the Eucharistic elements of bread and wine into the body and blood of Christ. It was in 1215 that the Lateran Council declared that the doctrine of Transubstantiation was essential to the faith. For more details on this see Eucharistic theology and witchcraft.

Though Barber discusses Charles Williams's  Arthurian poetry, he does not mention his novel on the Graal, War in Heaven, which also introduces the figure of Prester John. It is a kind of 20th-century version of a Grail Quest, with the Duke of North Ridings playing the part of a questing knight, with his Roman Catholic Eucharistic theology, and the Anglican Archdeacon of Fardles having a somewhat more mystically real eucharistic theology.

Now perhaps there is somewhere, mouldering on a forgotten shelf  in some university library, someone's doctoral thesis on the parallels between the development of Western Eucharistic Theology in the late 12th and early 13th centuries and the development in the legend of the Grail in Arthurian literature during the same period, and if so, I'd like to read it. But if there isn't one, I would love to see someone working on one, and someone suggesting that to potential students as a possible topic.

Commenting here rather than on the Inklings list because this is a sidetrack:

The problem with the five-star system would not be resoled by expanding it to ten, or to ten thousand stars. The problem is that is squishes all the different ways that a book can be good, bad, or indifferent into a single dimensionless measurement. Amazon and Goodreads both want you to give a star rating; I do, but I don't take it very seriously.

My own solution is to give the vast majority of the books I read 3 or 4 stars, with 2 for a really lousy book and 5 for something truly extraordinary. Then I write a review that tells what I actually thought of the book. I don't think I've ever rated a book 1, though my memory may betray me here -- generally I would abandon such a book unfinished.