The origin and meaning of Heritage Day

The 24th of  September  is a public holiday in South Africa, called Heritage Day, and I've been seeing some weird stuff on social media about how it originated and what it means.

One person thought it was originally called Shaka Day, and then became Heritage Day. Several people commented, suggesting other origins, but none hit on the real one -- it was previously called Settlers Day.

Someone else posted a poll on Twitter on "What word(s) best describe what you mean by ‘heritage’?"

One could argue that the first two are roughly the same -- my unique culture is, after all, the result of my richly diverse origins, which are unique to me, and what make my culture unique.

We spent most of Heritage Day this year traipsing around to three different cemeteries to unveil the gravestones of four different members of one of our church families, which seemed an appropriate thing to do on Heritage Day. And when my wife and I were both working we often spent Heritage Day on doing family history.

But, as I recall, before 1994 it was called Settlers Day, and had its origin in the republican referendum of 1960 and its aftermath. Back in 1960 a referendum held on whether South Africa should become a republic, and a majority of white voters agreed that it should (1960 was also the year in which the last black voters in South Africa lost their right to vote). So on the 31st May 1961 Queen Elizabeth ceased to be the head of state and was replaced by President Charles Robberts Swart, and the white supremacist Republic of South Africa came into being. 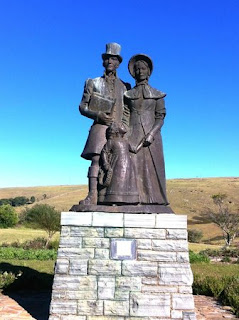 The Boere, having got their long-desired Republic at last, were feeling magnanimous to the Engelse, and since the Boere had three public holidays in the year -- Van Riebeeck's Day (6 April), Kruger Day (10 October) and the Day of the Vow (16 December) decided to give the Engelse one as well -- Ag Shame, they had lost their Queen. So they settled on Settlers Day, and I think it was first celebrated to mark the inauguration of the 1820 Settlers Monument in Grahamstown (now known  as Makhando).

President C.R. Swart, wearing a top hat and orange white and blue sash, arrived in state to officially open the monument, but I heard that Rhodes University students got in first, procured an open car, and a student dressed in top coat and sash drove along the presidential route taking the salute from all the military brass who lined it. Students also celebrated the inauguration  of the monument with the Verwoerd March, which is better seen than described. The marchers line up in two columns, and the sergeant-major barks the commands:

After South Africa became a democratic non-racial republic in 1994, such sectional ethnic commemorations were felt to be inappropriate, and Settlers Day became Heritage Day, when everyone could commemorate their heritage, whatever it happened to be. There was also a suggestion from the Inkatha Freedom Party that Settlers Day should become Shaka Day, but that was rejected in favour of something more inclusive..

That is what I recollect, as written oral history. It is what I can recall before checking any written sources.

Of course you can do a web search to find the "real" story, though it is probably less colourful, but I just wonder if anyone else has recollections similar to mine, especially anyone who was a student at Rhodes University in 1960/61.

But you if you do a web search can see

And my conclusion is, I think my oral history is more accurate.