Coraline: To hell and back

Coraline by Neil Gaiman
My rating: 5 of 5 stars

I think it was a child's vision of hell.

You could sub-title it, "To hell and back".

C.S. Lewis wrote to J.R.R. Tolkien on 7 December 1929, after reading Tolkien's poem on Beren and Luthien, "The two things that come out clearly are the sense of reality in the background and the
mythical value: the essence of a myth being that it should have no taint of allegory to the maker and yet should suggest incipient allegories to the reader."

And I think one could say that about this book too. I think it has no taint of allegory to Neil Gaiman, but it suggested several incipient allegories to me while I was reading it.

Note that these are incipient allegories, not actual allegories. They could become allegories in the hands of a fan-fic writer who wanted to extend them in that direction, but if they became fully-fledged allegories they would cease to be true myth.
Coraline had moved with her parents into a new house, which is actually a large old house that has been divided into flats. The apartment next to theirs is still empty, and the interleading door has been bricked up. But one day Coraline, feeling bored, opens the interleading door and finds a passage beyond, which leads to a another flat just like hers, with another mother and father, like hers in some ways, but having buttons for eyes. Coraline's other mother cooks a much more interesting meal than her own mother, and begs her to stay, saying that she loves her more. All she needs to do is let the other mother sew button eyes on her.

Coraline declines the offer, and returns along the passage to her real house but finds her parents gone. Her mother went shopping but did not return. Her father went to see someone on business but did not return. After two days Coraline returns to the other flat with the other mother to find out what has happened to her real parents. She explores the other house, and finds different versions of the neighbours in the other flats; younger versions of two retired actresses, reliving their memories to an audience of dogs. A cat that lived in the real world is there, but has gained the ability to talk. But as Coraline explores the woods and fields away from the house, she finds that the further she gets the less real they are. The trees look like photographs, and then like drawings, and beyond there is just a mist. 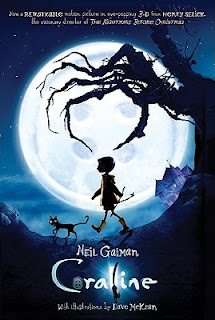 And this is the first incipient allegory, when Coraline realises that the world beyond the door is the creation of the "other mother". She displeases the other mother, and is locked up in a dark closet, where she discovers the shades of children of long ago who had likewise been lured by the other mother, and have lost their souls. Coraline discovers she has a mission, to seek and save the lost, and makes a bargain with the other mother -- if she can find the souls of the lost children, and her lost real parents, she can take them unmolested to the real world. The other mother agrees, but has no intention of keeping her side of the bargain.
Coraline realises that the world behind the door is not even the creation of the other mother. It is simply an imitation. The other mother, like Satan in the Christian myth, cannot create anything, but can only twist and distort the things already created. And Coraline comes to realise that the task the must accomplish is the harrowing of hell. She doesn't use those words, of course, but that is another of the incipient allegories that it suggested to me.

The other mother isn't an allegory of Satan, and more than C.S. Lewis's white witch of Narnia is, but her evil works in the same way. And the book suggests incipient allegories to the reader, while containing no taint of allegory to the writer.

So, if you have read the book (and I hope you have already done so before reading this) I wonder what incipient allegories it suggested to you.


View all my reviews
Posted by Steve Hayes at 15:06