A plague of hedgehogs?

About three weeks ago our dog Pimen caught a hedgehog in our garden.We rescued it from him, and our son Simon took it across the road and released it into the veld alongside the railway line. Every few years a hedgehog does come into the garden, and has to be rescued from the dogs, but it was not frequent occurrence. We have had Pimen for five years now, and this was the first one he had ever encountered. 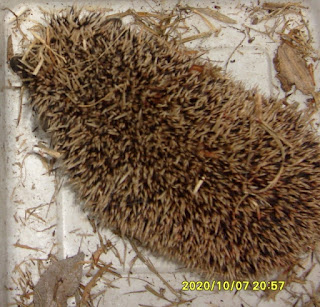 Then a couple of weeks later Pimen caught another hedgehog. It was unusual to see two in the same year.  Then a week later there was a third one. And yet another two nights ago. By this time Pimen knew the routine. When Simon opened the door, Pimen brought the hedgehog to him and released it at his feet. He now knows that Simon collects hedgehogs and takes them over the road to where they belong. Simon put it in an empty plastic ice cream carton and took it across the road.

Then last night there was yet another one, or perhaps it was the same one. Simon decided to call it Salvador, after Salvador Dali's painting The Persistence of Time. It is a very persistent hedgehog.

This time we took some photos before Simon took it across the road to release it, since it seems to be becoming a regular visitor.

Then about an hour later there was another hedgehog. Two in one night. This one was slightly bigger, and rather darker in colour, so not the same one. Perhaps it had come looking for Salvador. 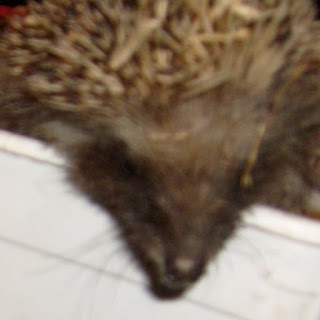 Simon took it across the road to the same place where he had left Salvador.

There were no more disturbances from hedgehogs last night, just the usual gunfire exchanged between cops and cable thieves who have just about stripped the Gauteng railway network bare.

About 30 years ago, the hadedas came to town.

They are raucous birds of the ibis family, and before 1990 they were a relatively rare sight. One had to go on bird watching expeditions out into the country to see them. And suddenly they became urbanised.

I suspected that it was because of the introduction of the pellet-style dog and cat food. Hadedas discovered that in suburban gardens, and thrived on it. There was an interesting ecological spin-off. People in  Johannesburg used to complain about a plague of large crickets called "Parktown prawns". After the hadedas came, one stopped hearing about Parktown prawns. And our lawn used to have lots of bare patches in the grass where ordinary crickets (about a third of the size of the Parktown prawns) were active. When the hadedas came, no more crickets. 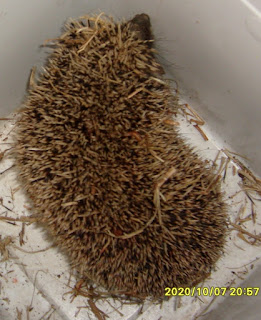 Thirty years ago it was hadedas, now it seems to be hedgehogs.

If we are going to see swarms (herds? flocks?) of hedgehogs as we did with hadedas 30 years ago, I wonder what the ecological effects of that will be? And I wonder what is attracting them to our garden all of a sudden.

Has anyone else been seeing a lot of hedgehogs lately?

One thing I do know: they are far more welcome than the cable thieves.