Last week I was at the Joint Conference of academic societies in the field of Religion and Theology, and I was struck by the almost complete absence of comment on the conference in social media, or in other electronic forums.

Only last year one of those learned societies, the Southern African Missiological Society (SAMS) held its annual congress in Pretoria, and there was a continual stream of tweets on Twitter with the #SAMS2011 hashtag. WiFi was available at the venue (a local church hall) to facilitate this, and there was even a screen set up to show the Twitter stream as it was occurring. 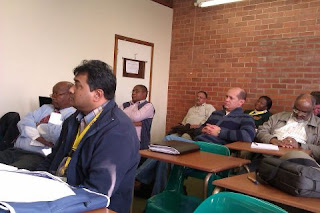 This year, in a far bigger conference, with 16 different societies participating, held on a university campus, there was almost no electronic sharing with those unable to attend. Though there was a good WiFi network available on the campus, conference participants were not given access to it, even though the conference was very expensive to attend. So the most we could manage during the conference was the occasional tweet from a cell phone, and the occasional picture on Facebook (and I still haven't managed to work out how to make the cell phone do these tricks, so I was never sure what was posted or not). But as far as I could see only three people tweeted using the #JCRT2012 hashtag, and one of those tweets was simply a remark that I seemed to be the only one tweeting on the conference.

Does this indicate that academics in the field of religion and theology have gone off the use of digital technology, and that SAMS 2011 was merely a flash in the pan, an incongruous exception?

There were digital projectors in all the venues where papers were presented, but I didn't use one for my paper because I didn't know beforehand what provision would be made for that, and in many cases when they were used they were distracting, as there was much fiddling with the equipment, and sometimes the wrong slide was shown, with interruptions while the right one was found, and where the equipment was used it was often only to show the text of the paper anyway.

While the lack of WiFi can be blamed on the organisers of the conference, I'm not sure that the blame lies entirely with them. If there was access, would anyone have used it?

Abstracts of all the papers being read were made available to conference participants beforehand, and I thought that that might be an opportunity of sharing what was being said and what was happening with those unable to attend. I posted a few of the abstracts in some electronic forums in the hope that they might elicit some comments or questions, but the response was zero. Perhaps that is an indication that academics in the field of religion and theology are technological luddites, and are simply not interested in using electronic media to communicate, or perhaps it was because they thought that the quality of the papers, as reflected in the abstracts, was so poor that they weren't worth reading, much less commenting on. I posted several abstracts in the missiological forum, since missiology is my field, but I also posted some in the general religion forum, the new religious movements forum, and the African Independent Churches forum. There didn't seem to be any responses in any of them.

I don't think Twitter is the best medium for commenting on or sharing what is happening at an academic conference. I think live blogging is better, as it can give more idea of the content, but without WiFi live blogging is not an option, and so we had to make do with Twitter, but it seems that most people didn't even use that.

I wonder if anyone will even read this!

I suggest that the next joint conference (in three years' time) take the form of a bosberaad, where the venue will be cheaper, with no electricity, and people can read their papers by the light of paraffin lamps.
Posted by Steve Hayes at 04:18

Hi Steve
Thanks for sharing those insights. For me this was only my second consecutive theological conference after Joburg and I must say, it was a challenge keeping a focus among the many presentations each day on various themes. Focus in terms of deciding which of the papers one would want to be part of each day.
I am not sure if sharing comments electronically had been a challenge for others too, but I wonder if there is a common blog where all those related could post their views against the presentations. The best place ideally should have been the conference website itself, which now is redundant. I am sure this is possible in the future.
It was great meeting you and spending time with you....Warm regards!

There are a couple of online forums where you can discuss at least some of what went on at the conference. One is the Christianity and society forum. and another, on the more specifically missiological aspects of it, is the Missiological forum. You are welcome to join either ot both. I posted some of the abtracts of conference papers to them.