A couple of months ago I read in a news report that Chrome had overtaken Firefox and Internet Explorer as the most popular web browser. Not among readers of this blog, it hasn't!

Here are the latest stats for web page browsers used to view this blog:

A couple of months ago I also noticed a surprising increase in the number of readers of this blog apparently coming from Ukraine.

I thought that there might have been one or two posts that appealed to Ukrainian readers, but no, the trend has continued. 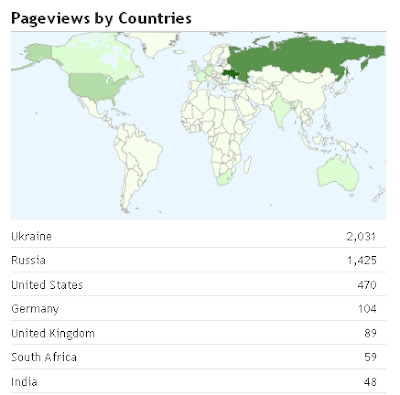 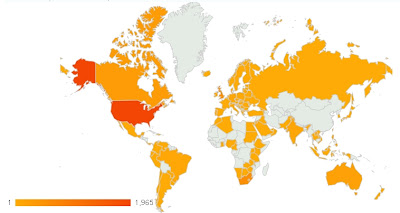 I haven't seen any comments from anyone from Ukraine to say why they like reading this blog rather than the other.

Or perhaps Blogger's statistics are just screwed up.
Posted by Steve Hayes at 06:10

The trouble with blog stats, of course, is that it only takes accounts of people who actually visit the blog at the Blogspot URL. Increasing numbers of people read via feed readers of some kind - including me, though I had to come to the blog to post a comment. And I guess it's possible that Chrome readers might be more likely to use Google Reader to read other blogs. Indeed, other Blogger users might simply join the blog as followers and then read it in their own dashboard.

There is a strange disparity between blogger's own numbers and those from statcounter. Blogger records about 50% more visits to the Poor Mouth.

In the meanwhile, I, a Ukrainian, keep getting huge numbers of visitors from South Africa and none from Ukraine.

Yes, the Blogger and Statcounter figures are vastly different.

Blogger reports more than 2000 visitors from Ukraine, Statcountter reports only 2 in the past week. Something is being hacked somewhere.