It's been a colder winter than we've had for a long time, though not as cold as those I remember from my youth, But a couple of days ago the first new leaves started appearing on our mulberry tree. 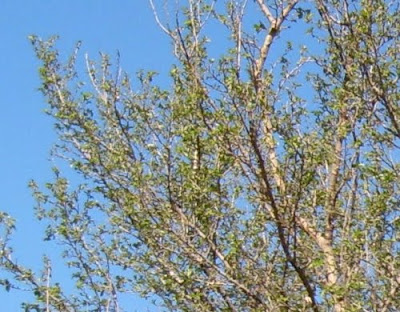 The mulberry tree is the second biggest tree in our garden, but was not here when we moved in 25 years ago, It must have been self-sown from one across the road near the railway line, from which the kids used to collect leaves in the days when they kept silkworms. We never see much fruit from it, though. It's too big, and most of the branches are too high to reach, so the birds get most of it. In about October there are huge flocks of very fat doves swarming over and around it. And when the fruit that the birds leave drops, our dogs eat eat it, spending days on end under the tree until there is nothing more to get. 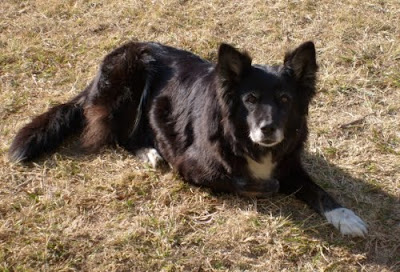 Our oldest dog Ariel (in the picture) is the greatest lover of mulberries, but the other dogs enjoy them too. Ariel is a cross Alsatian-Border Collie, and we hoped when she had puppies they might look a bit like her. She had several, but we had to sell most of them, and the one we kept isn't black with white patches, but is black with brindled patches, and neaver learnt ear control, so we call her Squiffylugs. Her father is a pure Alsatian.
Posted by Steve Hayes at 12:10