Bishop Alan meditates on the death of Harry Patch, the last British soldier of the First World War to die, which means that that conflict is now beyond living memory. Bishop Alan’s Blog: Harry Patch: Last of the Old Brigade:

This whole stream of our culture is now almost extinguished, although there may be a few civilians who lived through it left. I am not sure where this leaves us in our own Great War for Civilisation. I am optimistic enough to believe young people have a great underlying spirit and capacity for altruism, that comes out when really necessary. I love the way our children’s generation network and care for each other. Plainly the ravages of ego, selfishness and materialism come much more easily to us, and them, than to Mr Patch’s generation — another reason to respect our young people, who have so much more confused and confusing a world of which to make sense.

I've been reading the biography of Siegfried Sassoon, one of the "war poets" of that era, which chronicles his gradual disillusionment with the politicians who were running the war. He came to believe that, no matter what good reasons there may have been for getting involved in the conflict initially, politicians were trying to prolong it, and ignoring opportunities for peace.

And whenever I read books of that era, I am once again aware of the change that that war brought about. There was a huge cultural change. Life before the war and life after it were utterly different.

It was a conflict that shaped the lives of many who have shaped our lives. The author of the most popular book of the 20th century, The lord of the rings fought in it, as did many of the other authors of 20th century books. Those who lived through it probably saw more changes in their life time than most other generations, before or since. Before the war, the cavalry rode horses, after it, they drove tanks. And in civilian life, motor vehicles replaced horses as the main means of transport. In the short space of 15 years or so, the world had changed beyond people's imaginings.

This is illustrated by a picture in my grandfather's photo album from the Anglo-Boer War, which he has captioned "War in the Future". 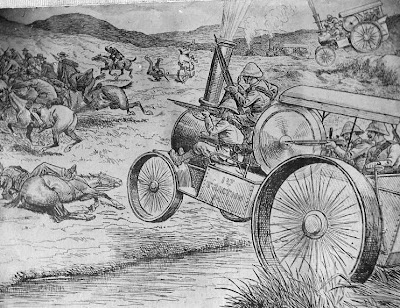 In our generation there haven't been many changes in modes of transport for the last 40 years. Forty years ago men went to the moon, but they have gone no further since then. Forty years ago, Boeing 747 jumbo jets were introduced to the airlines of the world, and while there have been refinements since then in electronics and other things, the basic mode of transport has remained the same. Forty years before that it was airships.

And how long will it be before one can no longer find anyone who knew anyone who fought in the First World War?

It would be interesting to see if there were any other combatants still surviving from the opposing sides. Always good to see things from both sides!