The Madonna of Excelsior

The Madonna Of Excelsior by Zakes Mda
My rating: 5 of 5 stars

A novel that has a little bit of everything, almost -- a sex scandal, sibling rivalry, political chicanery, and believable characters. And so much of it is true, I read it in the newspaper 50 years ago.

It is set in a real small town in the Free State province of South Africa, and is based on real events, so the usual disclaimer about the characters not resembling any real persons, living or dead, is somewhat differently worded. Though the events are a matter of public record, the characters are fictitious. I've written a few books set in a small South African town, but having lived in a small town myself, I didn't dare to use a  real town as the setting, but Zakes Mda boldly does so, and his book is all the more realistic as a result. 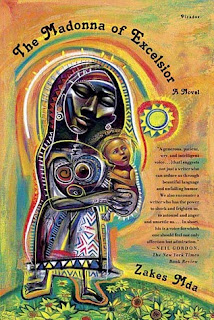 But the fictitious characters do resemble real people. And the book gives a microcosm of South Africa in the last three decades of the 20th century. Excelsior is a real town, and it really was rocked by a sex scandal in the early 1970s. The neighbouring towns, mentioned in the book, are real and I have been to, or through some of them.

And at least one of the characters is real, Father Frans Claerhout, a Roman Catholic and artist who lived at Tweespruit just south of Excelsior, and descriptions of whose paintings at the beginning of each chapter form a linking motif for the story.

Popi Pule has two half-brothers; one, Viliki Pule, is black, and the other, Tjaart Cronje, is white, and all three were born in apartheid South Africa, much of whose legislation was calculated to prevent precisely those kinds of relationships. Viliki and Puke's mother Niki had been Tjaart's nanny when he was small, and she is the eponymous Madonna of Excelsior, and had been a model for some of Father Frans Claerhout's paintings.

People sometimes ask, what was South Africa like during apartheid, and during and after the end of apartheid, and in this book Zakes Mda nails it. He tells it like it is, and was. He has written several books set in South Africa, and each of the ones I've read gives an accurate picture of some or other aspect of South African life. There are links to some of my reviews of them here,