Lost Horizon by James Hilton
My rating: 5 of 5 stars

This book, first published in 1933, is a kind of throwback to the kind of late-Victorian and Edwardian adventure novels exemplified by those of H. Rider Haggard, but also includes, for example, The Heart of Darkness by Joseph Conrad. It follows the convention of a story within a story, where several gentlemen gather for cigars or port after dinner in a club or restaurant and one of them tells a story of his own adventures, or those of a mutual acquaintance. The story often involves a far-away place with a society cut off, either partly or completely, from the outside world -- in this case a monastery called Shangri-La in a hidden valley in Tibet.

By the time James Hilton wrote this story, most such stories had already moved into the realm of science fiction, and had moved to other planets, other solar systems, other galaxies, or even other dimensions as most of the surface of our planet had been mapped.

This story is one of the better examples of the genre, and probably one of the last of those set on earth, so much so that the name of its hidden place, Shangri-la, has become part of popular culture, and has found its way in to pop songs and the names of holiday resorts and the like. 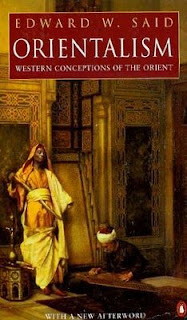 I've been reading this book in parallel with a couple of others on related topics, notably Orientalism by Edward Said, and Magic and Mystery in Tibet by Alexandra David-Neel. I'll write more about those in their own place, perhaps with some reference to this one, but Lost Horizon is in some ways a very Orientalist book.

In Lost Horizon the protagonist, Conway, finds himself de facto leader of four refugees from a revolution, who are subsequently victims of a hijacking. Conway, we are told, unlike at least one of his companions, "...had no race or colour prejudice, and it was an affectation for him to pretend, as he sometimes did in clubs and first-class railway carriages, that he set any particular store on the 'whiteness' of a lobster-red face under a topee."

But the youngest member of the party, Mallinson, was very much steeped in Orientalism, colonialism and "whiteness", and almost as soon as they had arrived at Shangri-La was demanding "porters" so they could get back to "civilization". And even the unprejudiced Conway seemed to think that "porters" would be a necessity to enable them to leave. It seems a curious demand, since they had been refugees and subsequently hijackees, and thus had no luggage to carry.

So while Said's book gives a history of the growth and development of what he calls "Orientalism", Hilton's fictional account probably gives a better idea of how it worked in practice in its heyday. Sangri-La may be a fictional place, but it serves to project the image of the Western world and its attitudes in the 1930s, just before the rise of Hitler.