The devil made me do it

Someone is found guilty of a heinous crime, and is reported in the media as having said "The devil made me do it", and the perception is created that the role of the devil is to absolve Christians of responsibility for all the evil things they do.

The reality is the other way round.

Just before receiving communion, Orthodox Christians pray to the Lord Jesus Christ "who came into the world to save sinners, of whom I am first". As Christians the only thing we can say is not that the devil made me do it, but that I let the devil talk me into doing it. What we can, and must say, is "The devil made him do it," or "the devil made her do it." 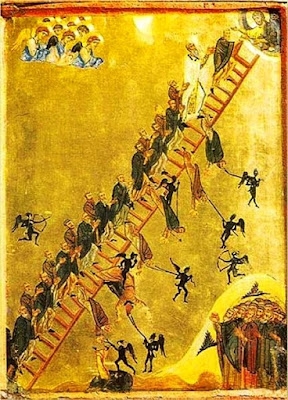 The primary characteristic of the devil is the making of accusations. In Hebrew the satan is the accuser, the one who makes accusations in a court of law (see Zechariah 3 and Revelation 12:10). In Greek satan is translated as diavolos, from from which the English words devil and diabolical come.

Our Lord Jesus Christ said, "Judge not, that ye be not judged". It is a human tendency to want to judge others for the evil that they do, and to judge others more harshly than we judge ourselves. Actually it is devilish tendency, for the most characteristically satanic activity is the making of accusations, and especially false accusations.

Not judging other people does not mean that we should call evil deeds good. Evil deeds are evil, but we are to judge actions rather than people. We are to love the sinner but hate the sin. The devil came into the world to accuse sinners, but Jesus Christ came into the world to save sinners, of whom I am first. If we ask God to have mercy on us, and he does, we ought to cultivate a merciful heart and not judge others more harshly than we judge ourselves. As G.K. Chesterton put it, "In the best Utopia, I must be prepared for the moral fall of any man in any position at any moment; especially for my fall from my position at this moment."

Perhaps the best summary of the Christian view of the role of the devil in Christian theology comes from a secular anthropologist, whose book Demons and the devil describes the result of a study he made of orthodoxy and orthopraxy on the Greek island of Naxos;


The Orthodox moral world emerges as an arena in which good struggles against evil, the kingdom of heaven against the kingdom of earth. In life, humans are enjoined to embrace Christ, who assists their attainment of Christian virtues: modesty, humility, patience and love. At the same time, lack of discernment and incontinence impede the realization of these virtues and thereby conduce to sin; sin in turn places one closer to the Devil... Since the resurrection of Christ the results of this struggle have not been in doubt. So long as people affirm their faith in Christ, especially at moments of demonic assault, there is no need to fear the influence of the Devil. He exists only as an oxymoron, a powerless force.

Bookbub is the best marketing for your book. Try to be flexible with the promotion date. Ask them for any suggestions to improve. Also, having 100+ reviews helps. Try usbookreviews dot com for reviews