This week we've been watching the Star Wars movies in preparation for hearing Thorsten Marbach speak about The Theology of Star Wars at TGIF. 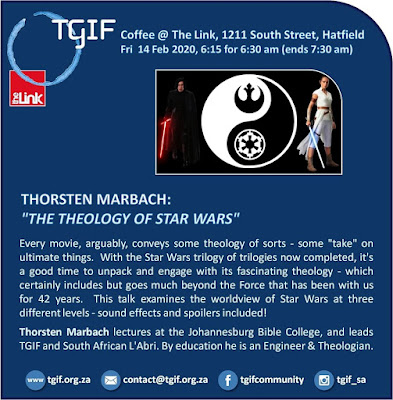 We watched the first six films over the preceding week, in chronological order rather than in "publication order", which gives a somewhat different view of it than one would have if one watched each one as it came out.

Thorsten in his talk noted that the films had made a high cultural impact (don't blame Thorsten for all that follows in this article, however. It was inspired by seeing the films and hearing his talk, but does not necessarily reflect what he said).

We never saw the films when they first came out, and so our first contact with the Star Wars universe was through its indirect cultural effects rather than the stories themselves. Popular phrases like "the Dark Side" and "may the Force be with you" (with its concomitant date pun, "May the Fourth be with you") circulated widely, even among those who had never seen any of the films.

Tropes from the films have permeated Western popular culture and beyond, so that they have influenced popular perceptions of Christianity and expressions of Christian culture. Christians often speak of choosing an evil course of action rather than a good one as "going over to the dark side" without giving much thought to what "the Dark Side" signals or symbolises in the films.

Some of this integration of Star Wars with Christian tropes can be seen in the following picture. 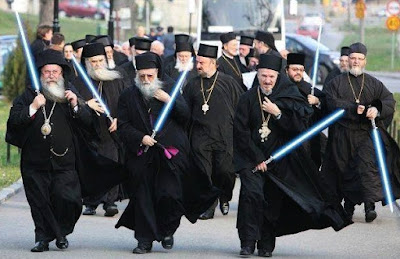 Star Wars, then, provides several metaphors and links to (Western) secularised popular culture to explain the Christian faith to those unfamiliar with it.

But that kind of thing can work both ways.

Christians can use metaphors from Star Wars to help explain the Christian faith, but people who come to the Christian faith with the Star Wars views of values and meaning and of the nature of reality are just as likely to get it seriously wrong if they approach Christianity with some of those presuppositions.

The Star Wars phenomenon coincides with the rise of computer gaming, and there is a large overlap between gaming technology and that used to produce Star Wars. And programming computer games requires that different characters in the story be given different quantifiable powers. And so people ask which is more powerful. The Jedi or the Sith? Lucifer or Satan? A witch, a wizard, a warlock or a mage? The last lists of characters don't appear in Star Wars, but the Star Wars values and worldview leads people to ask the same sorts of questions about them.

Spoiler Alert: if you haven't seen the films and want to, you might want to skip what follows
.
There is something of a controversy over whether one should read C.S. Lewis's Narnia stories in publication order, or in the chronological order of the events in the human world. If you read The Magician's Nephew first, you lose the surprise of the discovery of Narnia in The Lion, the Witch and the Wardrobe, and the same thing applies in Star Wars.

If  you begin with Episode 4 (the first released) you don't know that Darth Vader is the father of Luke Skywalker and Princess Leia until the end of the second episode (Episode 5). But when you see Episode 1 (The Phantom Menace) immediately following Episode 6 (The Return of the Jedi), you already know that the innocent young Anakin Skywalker, prophesied as the Chosen One who will "balance the Force", will achieve that balance by opting for the Dark Side.

So in Star Wars there is a conflict between two worldviews: one that sees good and evil as aspects of the same impersonal Force that must be kept in "balance", and the other that sees love as stronger than power and good as something to be chosen in preference to evil. At one point it is said that evil is needed so that we can know good by contrast.

Ralph Winter, a Christian missiologist, once adapted the Star Wars terminology to illustrate this. Episode 5 of Star Wars is subtitled The Empire strikes back. In it, evil, having been driven out, returns. Winter turns this around, pointing out that in the Bible history is divided into two parts. The first part, Genesis 1-11, tells how God made the world good, and evil entered and took over God's good creation and twisted it. The rest of the Bible, from Genesis 12 to the end, which could be subtitled The Kingdom strikes back, tells how the good came back. Such an allusion to Star Wars also shows the influence it has had on popular culture.