On treating miners as human beings

Did 44 people have to die to get people to take striking miners seriously? Are they being taken seriously even now? Are they even regarded as human beings? Writing Africa - Tinyiko Sam Maluleke's Website: Did Human Beings Die At Lonmin's Marikana Mine?:

If the workers are human, government will engage in more than the knee-jerk, poorly thought-out proliferation of publicity stunts aimed at appeasement of investors and mineworkers as well as the saving of face. If they are human, perhaps Lonmin might just realise that expectations of an improved wage, better working and living conditions might just be valid and even reasonable. If the miners are human then Shanduka may wish to contribute to the improvement of the wages and living conditions of the miners instead of waiting till the workers are dead to contribute to funeral costs.

There have been calls for a week of mourning. 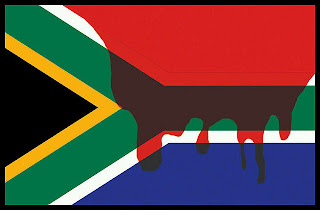 Back in the days of hippies and student power there was a saying, "Don't mourn! Organise!"

Mourning, lamenting, wailing and hand-wringing are mere self-indulgent exercises if there is not an immediate and tangible improvement in the wages and living conditions of the miners, as Tinyiko Maluleke points out so eloquently in the blog post I have quoted above.

And, from the point of view of the investors and bosses, even if you don't want to treat miners as human beings, but rather, to use that dehumanising phrase, as "human resources", it still makes sound business sense, as this article points out: Lonmin needs to pay up to avoid another Marikana showdown - Telegraph:

Since the drillers walked out on August 10, all Lonmin’s managers have done is bang on about the strike’s illegality. Sure, they may have the law on their side. But look at the cost. Thursday’s massacre, at the hands of the police, came after a misguided ultimatum that strikers return to work or be sacked.

Even after the bloodshed, there have been two similar ultimatums, rather undermining the sincerity of the condolences with which they were interspersed. Depressingly, here was the main message today from Mark Munroe, executive vice president for mining: “By 7am tomorrow we expect workers to return to work. After that Lonmin has the right to fire them.”

If they say that the mine can't afford it, and that the workers' demands are unreasonable, perhaps they should look to see if they can afford the salaries of the grossly overpaid bosses, whose incompetence and intransigence led to the crisis in the first place.

And even Zwelinzima Vavi, the Cosatu leader, was banging on about the illegality of the strike.

For those who want to have a purpose-built liturgy for such occasions, here are some suggestions:

Jer 22:13-14 Woe unto him that buildeth his house by unrighteousness, and his chambers by wrong; that useth his neighbour's service without wages, and giveth him not for his work; That saith, I will build me a wide house and large chambers, and cutteth him out windows; and it is cieled with cedar, and painted with vermilion.

Pro 28:8 He that by usury and unjust gain increaseth his substance, he shall gather it for him that will pity the poor.

Pro 28:11 The rich man is wise in his own conceit; but the poor that hath understanding searcheth him out.

Pro 28:15 As a roaring lion, and a raging bear; so is a wicked ruler over the poor people.

Pro 28:17 A man that doeth violence to the blood of any person shall flee to the pit; let no man stay him.

Pro 29:7 The righteous considereth the cause of the poor: but the wicked regardeth not to know it.

Steve,
I agree with what you've written and I've shared it on FB, Google+ and on my own blog.
I hope you don't mind.
Love,
Terri in Joburg