Making political capital out of the miners' strike

Violent clashes between police and striking miners at the Lonmin mine at Marikana in North-West Province, and between members of rival unions, have left 34 dead (at the last count) and many more injured. This has shocked most people in South Africa. After 18 years of talk of transformation, can we say that anything as been transformed from the old South Africa? Are the police that shot striking miners at Marikana in 2012 any better than those who shot protesters against the pass laws at Sharpeville in 1960? What has been transformed?

In such circumstances it's all to easy to join the blame game.

Who are the good guys and who are the bad guys in all this?

But the more you learn about what happened and is happening there, the more you realize that it's not at all simple. There are no good guys and bad guys. There's good and bad in all. So before pronouncing judgement, it is wise to learn a bit more about the issues and what is at stake, and what led to the strike. One fairly good article on this topic is here: Daily Maverick - Beyond the chaos at Marikana: The search for the real issues.

I'm sure that it doesn't tell the full story, and things have moved on since then, and much of it has been overtaken by subsequent events, but it is worth reading anyway.

Can this be compared with Sharpeville?

Yes and no. The Sharpeville protesters were unarmed, and most were shot in the back; the Marikana strikers were armed, though most with "traditional weapons". One can hope that there will be a Commission of Inquiry, and that it will not suffer the same constraints as the Sharpeville one.

Back then, when we decimalised our currency, and exchanged pounds shillings and pence for Rands and cents, underground miners used to earn between 15c and 35c a shift. That was roughly about R4.00 a month. If they are earning R4000 a month, that is 1000 times more.

Of course back then the Rand was worth a lot more than it is now. Again, at a rough guiess, I'd say it was worth 100 times more. A Rand today is worth what a cent was worth back then.

How do I measure?

In 1961 an omelet and chips in a downtown Joburg restaurasnt cost 35c, as did a plate of mince and rice. You'd be lucky to get the equivalent for R35.00 today. A bottle of Coke or Fanta or Sparletta cost 5c, as did a cup of coffee or a daily newspaper. You'd be lucky to get any of those for R5.00 today. A hamburger cost 15c -- equivalent to the daily pay of the lowest paid miners at the time (the miners did get food in the hostels).

So if you multiplied the pay by 100 it would be R400 a month today, not R4000. But I don't know if the miners of today who are earning R4000 a month are still getting free board and lodging. And even those who got free board and lodging on the job back then often had families at home elsewhere. So if they had a wife and three children, they could feed themselves on a quarter of a hamburger each per day.

I don't know. If such questions are to be answered, let a judicial Commission of Inquiry look into it. 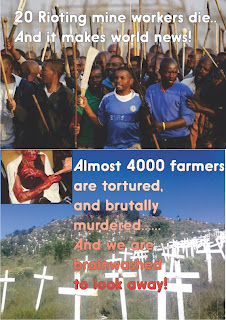 But there are some things about this that do seem more unequivocally bad -- people who are not directly involved trying to cash in and make political capital out of it.

For example, there's one of those photos doing the rounds on Facebook, which is both disingenuous and malicious.

Another example of someone trying to cash in on the situation to make political capital is here: Malema at Marikana: 'Many will die' - Mail & Guardian Online:

Julius Malema wasn't pulling punches, when he spoke to several thousand Marikana mineworkers on Saturday. President Jacob Zuma should step down, he said, as should Police Minister Nathi Mthethwa.

ANC National Executive Committee member Cyril Ramaphosa came in for a drubbing as well – with the implication that he was partially responsible for the deaths of the strikers killed this week.

The National Union of Mineworkers (NUM) were sellouts, he said, and police had no excuse for using live ammunition.

Julius Malema seems to see this as his ticket out of the political wilderness.

Ah, Cyril Ramaphosa, he who is the ex leader of the NUM and now amazingly sits on the board of Lonmin, the ex Secretary General of the ANC, also used to be an MP. Methinks any thought that the NUM represents it's members can perhaps be called into question.

Is it any wonder that the union like the AMCU can claim to stand for the people rather than the NUM.

This is interesting. My SA friends have been feeding back and the word is that this is an inter=tribal, internecine sort of thing, exacerbated by the bosses.