Bling bling, it's bling they say

So I’m snoozing on the beach, right? And I hear a man’s voice that says in Russian, “Come on, girls, stop climbing the railing. What will people think? That everybody walks on the footpath like normal people, and only the Russians have to act all weird? Remember that people see us as representatives of our country abroad.”

Obviously, I was eager to see this defender of the image of Russians, so I opened my eyes. I saw a family: a man, a woman, and two precious little girls who were, indeed, trying to climb the railing. The man was a huge, burly Russian in minuscule shiny speedos that were smaller than even those worn by aging Italian gentlemen. He was also wearing a gold chain that was as thick as my finger. I have very small, dainty fingers, but still just imagine a chain like that.

Hanging from this chain there was a huge gold gymnast. A gymnast is a big golden cross that the Russian nouveau riche used to wear to show off their recently acquired wealth.

You have to see it, though, to believe it. 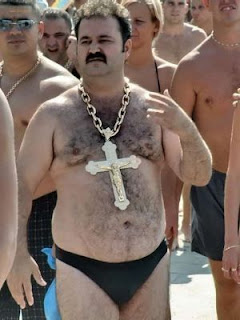 I was aware that something was going on 20 years ago, when our parish in Johannesburg was visited by Bishop Viktor of Podolsk. He was brought to South Africa by the Russian Chamber of Commerce to bless their new office in Johannesburg. I was mildly surprised that they would bring a bishop all that way for such a thing, and attributed it to inexperience. They weren't familiar with chambers of commerce after 70 years of Bolshevik rule, and were probably even less familiar with bishops. But they all seemed to be wearing securocrat suits just like their South African counterparts. The bling must have come later.

Hat-tip to my friend Plamen Sivov who provided the link the the picture, and also some more explanation:

The whole gymnast thing comes from a popular Russian joke about the "new Russians", the low-culture nouvelle riche. The story goes like this: a "new Russian" goes to a jewelry store and asks for a golden cross that would fit his social status. The store keeper brings a big golden crucifix. The rich guy looks at it and says: Take down the gymnast, wrap up the rest.

...and the gymnast association is probably related to the finishing position of any gymnastic performance - with hands stretched out and all. Those mafia-type guys from the joke (we have them in Bulgaria too) were known to be closely related to the sports clubs in the early years of post-communist transition.

And here I was thinking that our tenderpreneurs were bad. They've got a long, long way to go to catch up with the Russians or the Bulgarians. Kitschy kitschy koo.
Posted by Steve Hayes at 12:51