We just got back from voting at the Nellie Swart Laerskool in Queenswood, Pretoria, and we were in the queue for nearly 2 hours, from 8:15 till about 11:10. The queue was much longer than last time around, and by the time we left it was just as long as when we went in, indicating that there is more interest in the election than in 2004. 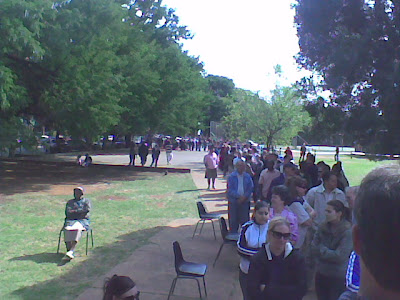 In part that may be because of the rumours that floor-crossing has been dropped. In 2004 neither of our sons bothered to vote, and gave floor crossing as the reason. They saw no point in voting for a party if its MPs were able to switch to another party 18 months after the election. Generally in 2004 the youth seemed fairly apathetic. One of our sons, who works in a bookshop, says that in 2004 only one of his colleagues was thinking of voting, whereas this time only one was thinking of not voting.

As we edged slowly forward we chatted to people before and behind us in the queue. A woman in front of us said she was planning to buy, not bake, a cake to celebrate voting. A man behind us said he was glad it was not too hot, so we did not have to queue in the hot sun. It was in fact a very pl;easant cool autumn day.

It was also quite something to reflect that this was our fourth democratic election. For most of my life i wondered whether I would ever see the day when we had a democratic election, and now I've seen four of them. Of course a bunch of idiots can be, and usually are elected. But they are our idiots We voted for them.
Posted by Steve Hayes at 11:23

It is hard for me to imagine the liberation that comes with democracy, I have always lived with it.

The celebratory tone of your post is a wake up call to folk like me who take the vote for granted, even though it is not too far back in history that it would have been denied to me, I have never been without the opportunity.