What's wrong with these pictures?

What is an ikon?

Is it religious art? Is it something meant to make church buildings look beautiful? Is it a visual aid, used for teaching?

In a sense ikons are all of these, but none of them captures the essence of what an ikon is.

For the record, I have a rather high opinion of the late Pope. I am not unaware that he is widely regarded as a saint within the Roman Church. He may well be a saint. I don't decide those things. But I do know one thing. Neither he nor George H. W. Bush (a true gentleman and a better than average president), nor Mikhail Gorbachev were or are Orthodox. Two of the three depicted in iconography are still alive and one is I believe an avowed atheist!

Hat tip to Ken over at Hallowed Ground.

At least one can say that the figures in the pictures don't have haloes. That means they are not ikons, and one would not venerate them, even if they are in a church. 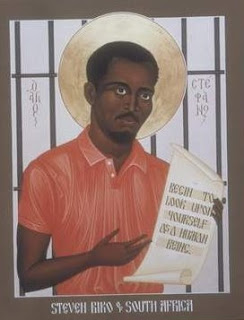 Here is a slightly different example. Some years ago a colleague of mine in the Missiology Department at the University of South Africa, Klippies Kritzinger, showed me a postcard with a picture of Steve Biko, painted in an icon style, and asked me, as an Orthodox Christian, what I thought of it. He also showed me a similar one of Gandhi. Both of them came from Bridge-Building Images, and there are several others available from that source (hat-tip to Book Reviews and More: Robert Lentz's Icons).

My answer was that I did not regard them as ikons. First because neither Steve Biko nor Gandhi were Orthodox Christians (Gandhi wasn't any kind of Christian). Secondly, because even if Steve Biko had been Orthodox, no Orthodox ikonographer would have painted him like that, with heavy prison bars in the background. If he had been Orthodox, and an ikon had been painted of him, then the prison bars would have been reduced, and he would probably have been showing either holding them, or with his hand resting upon them, to show that a martyr's death is a triumphant one. This can be seen, for example, in ikons of St Catherine, who, it is said, was put to death on a wheel. She is shown with her hand resting on a wheel, not with the wheel dominating the background.

But that does not make the pictures of them Orthodox ikons.

My blogging friend Matt Stone writes quite a lot about Christian art, and gives many examples, including some examples of ikons. But many of the works he shows I wouldn't regard as ikons.

In my own writing I usually distinguish between "ikons" and "icons". Ikons with a "k" are Orthodox ikons, icons with c "c" are what you see and click on on your computer screen, or are celebs on steroids (often described as "iconic"). 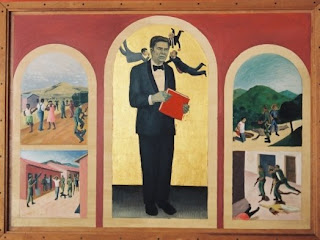 There is one more non-example of an ikon (or example of a non-ikon) that is perhaps worth mentioning. This one is supposed to be based on some famous painting, though I'm not sure which one. If anyone can tell me, I'll be grateful.

This too is not an ikon, but is rather a satire or parody of a religious picture, and is almost, in a sense a political cartoon. I'd say in belongs in the same genre as the pictures of the political figures in the Romanian Church, with the exception that those are admired, while this one is not.

If you'd like to know where we saw it, and how we came across it, you can read the story here.

Hmm, ahh, but... Fr Robert Lentz, whom I admire greatly, was trained as an iconographer in the Eastern Orthodox tradition and still works according to the prescribed methods as far as I know.

What about this icon of Hagia Hesychia (an energy of Christ) by Fr William Hart McNichols Holy Silence? (He was also trained and works in the iconography tradition and methods.)

True iconography is surely about perspective, neither the person nor the background are the point, the window is opened to God.... all of these folk could be icons in diferent ways, but surely perspective is essential from both the viewer and the artist!

I'm not sure what you mean by perspective there. Ikons often have no perspective at all, or reversed perspective. You can see what I mean in an earlier article I wrote on The ikon in an age of neo-tribalism.

Incidentally, somewhere else someone said that true ikons never show animals, but the ikons of St George and St Demetrius show horses, and especially the ikons of SS Florus and Lavrus.

are you sure these pics with Bush and the Pope are not just photoshoped in?

No, of course they're not icons. (And, frankly the thought of any sort of picture of Bush in a Church strikes me as rather repugnant).

However the genre of Robert Lentz "icons" (or "ikons", to use your distinction) is more troubling, and is part of a broader trend of Western Christians using "Eastern" things for their own purposes, without being able to see them as part of a broader whole and without accountability to a broader tradition.

Yes, I think in part that is because Westerners don't approach Eastern tradition holistically, but rather eclectically. At one time I was a bit like that. I used to put ikons in an Anglican church when I was an ikon, but it soon became clear that people saw them as nothing other than decorations or visual aids.

While I admire the craft of former OFM Robert Lentz and his student, Fr. McNichols, I feel very much offended by their use of iconic writing to push their pet causes, some of which are contrary to the teachings of Our Lord and the Church (for example, see what Lentz did with Saints Sergio and Bacchus or his divinization of pagan religions). They both put up as heroes people who espouse their pet causes. But there is no icon of, say, those who defend the lives of the unborn or even of the Holy Innocents (of Bethlehem or today).
Mr. Lentz could not serve two masters -he chose his own and so had to leave the OFM, it seems. His iconography reflects his choices and is incongruent with classic iconography.