Hat tip to spookyrach for the link. Unlike spookyrach, I rather liked the movie:

What Classic Movie Are You?
personality tests by similarminds.com

But as with the previous post, it brings back memories.

From 1969-1972 I lived in a kind of commune in Windhoek, which we called the Community of St Simon the Zealot. We sent an occasional newsletter, called The Pink Press to friends and well-wishers, and in one of them described an international tour (to South Africa, which at that time was trying to claim South West Africa/Namibia as its own, so we described it as "international" to emphasise Namibia's separateness).

An Anglican priest friend, Tom Comber, then living in Oxford, England, wrote saying that he had enjoyed the description of doing an "Easy Rider" through the Western Transvaal dorps. I hadn't seen the film (perhaps it was banned in those days), but after hearing of it from him, I always wanted to see it. But I only got to see the film many years later, when it was shown on TV quite recently. 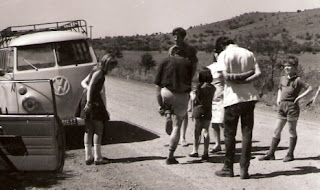 Those were the days of ethnic cleansing in South Africa, and we went to a place called Morsgat (Messhole), subsequently renamed Madikwe because Cosmas Desmond, who was then a Franciscan priest, reported that the people who had been moved there lacked basic necessities like food and blankets. Cosmas Desmond wrote a book, The discarded people, which drew the ethnic cleansing then taking place to the attention of a wider public. The picture shows some of us on the road to Morsgat.

Anyway, for what it's worth, here's my diary entry for Saturday 15 November 1969, our "Easy Rider" through the Western Transvaal:

We set out early in the morning for Morsgat, in three vehicles. Ted Goodyer, now deacon at St Martin's in the Veld, was driving the Christian Institute's combi, and Mary Davies and Richard Schaerer went with him. Shirley and John and Mark Davies went in their own car. Elizabeth Davies came with me in an Opel station wagon belonging to a woman called Amanda, but nobody knew her surname. We drove out through Blackheath, Tarlton and Magaliesberg, and at Koster stopped for tea and biscuits at the side of the road. Just beyond Swartruggens we turned off to the right along a dirt road, and about 25 miles further on we came to Morsgat.

Our plan was that the clergy in the group - being Ted, John and me, would go in to
distribute the food, while the rest waited outside. But there were a lot of houses in the process of being built, and a bloke came out of the building yard and gave every impression of expecting us. He said we were expected at the school, because that was where the doctor had gone last time. Earlier on the journey I had seen a police van go on ahead, and I suspected a trap, but the bit about the doctor sounded all right, so we went. The school building was in the shape of a U, and sure enough, the police-van was there, waiting. So I didn't go into the school, but parked under a tree outside. The policeman came up and introduced himself as Sergeant van den Berg, so we all said good morning, and John asked him in a polite conversational way where would be the best place to distribute the food. This clearly embarrassed him, as he had obviously come to be professional and nasty, and he said in his best professional and nasty voice "Have you got permits to be here?", and John said "We don't need permits, we are clergy." The sergeant was a bit taken aback by this, and took down John's name and address, and went off somewhere, and a few minutes later returned with a Plymouth Barracuda with an SB man in it.

The SB man, Loots, was a real thug type. No flies on him, he couldn't smile or be friendly if he tried. He went round demanding permits, names and addresses, and took all names and addresses, including the children's. Then he insisted that Shirley and Richard and the children must leave and go to the Swartruggens police station, so they went off with the Fuzz, while we stayed and distributed the food after consulting with a bloke who claimed to be a headman. He and a few henchmen kept order, but eventually started using whips on the crowd. When it got too chaotic, we moved into the school, and distributed from classroom windows. The distribution of the food went off all right, but the clothes were an altogether different animal. Here, the majority of the henchmen tried to keep the best for themselves, and when we went outside the combi was almost mobbed. One or two of them were concerned to see that the old people got some, but the rest just grabbed for themselves. The combi was surrounded by about fifty shouting gesticulating people, and later John said he had seen nothing to equal it for sheer greed and grabbing, except perhaps in photos he had once seen of a scramble to buy shares on the Stock Exchange.

When the combi drove off I followed it a bit later, but it had disappeared, so I drove back to Swartruggens and found Shirley and Richard and the children. We stopped at a garage to buy some cold drinks, and then went back towards Morsgat to find John and Ted. Loots passed us going in the opposite direction, and looked puzzled. We drove about 100 yards up the dirt road, and stopped for lunch under some trees, and almost as soon as we got there John and Ted arrived in the combi. We had lunch there, and on the tar road I saw Loot's car turn around. We thought he would come up to keep an eye on us, but he didn't appear. On the way back, Mary rode in the car with me. We passed the place where Loots had parked, and Shirley saw him sitting in a tree, watching us from there. It seems almost as good as the story of Sergeant Ndlovu hiding in the butcher shop at Pevensey. In the evening Jill Chisholm, a reporter from the Daily Mail, came round to hear the full story of the day's doings. 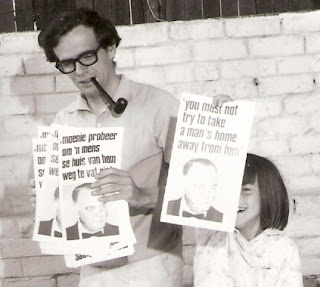 The following day we burned a lot of posters showing B.J. Vorster. It was part of an antiremovals campaign the previous year, and showed Vorster and a quote from him, saying "You must not try to take a man's home away from him." The picture shows Cos Desmond and Liz Davies throwing some of the 20000 surplus Vorsters on the fire.

When I saw the film Easy Rider I could see why Tom Comber was reminded of it. Some of the communities in the Western Transvaal are a bit like those depicted in the film. But those were not the people we encountered on our journey. Ethnic cleansing created its own peculiar society, and some of those effects linger to the present, part of the legacy of apartheid that we are still struggling to cope with.
Posted by Steve Hayes at 07:21

You're one of my favorite movies! Here's a link to a book excerpt you might enjoy:

Perhaps I need to see the movie again.

For thirty years or more I knew only the title, associated by one line in a friend's letter with visits to places such as I described, and not really with the film at all. It was the quiz that sparked off the recollections.

I was Wuthering Heights!