From communist youth to Orthodox monks

Most of us have read in the newspapers and seen graphic images on television of the violence and destruction of the Wars of the Yugoslav succession, when Yugoslavia tore itself apart (often with outside assistance) during the 1990s.

But even in the midst of the destruction, there were signs of hope, as some, at least, pursued more preaceful ideals. Among these is a new generation of Orthodox monks. They grew up under the communist system, indoctrinated at school with atheism, and now have turned to a life of prayer and repentance.

There is much talk nowadays, especially in "emerging church" circles, about a "new monasticism", but in the former Yugoslavia the youth have opted for a restoration of the old monasticism. 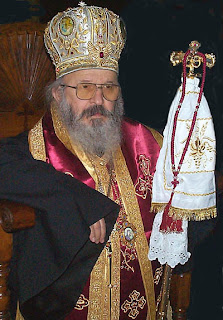 And now the man who has been at the centre of the monastic revival in Serbia, His Grace Artemije, Bishop of Raska and Prizren, will be visiting South Africa, and will speak on the topic Orthodox monasticism, and the revival of the monastic life in Serbia after communism at St Thomas's Orthodox Church, Sunninghill Park, Gauteng on Saturday 5th May 2007 at 5:00 pm. If anyone is interested in attending, you will find more information here. Anyone who is interested in Christian monasticism, new or old, is welcome to attend.

How to get there

From Johannesburg, Pretoria, East Rand, West Rand, take the N1 freeway to the Rivonia Road offramp, then turn North towards Leeukop prison. About 2km from the freeway exit the road narrows, and just before it narrows there is a turn-off to the right, and almost immediately one turns to the left, then right again, and the entrance to the church parking is just round the corner. There will be a sign that says "Church Parking" at the gate.

If you have any questions, please use the comment form below.
Posted by Steve Hayes at 06:58

In the Reformed tradition there is also a growing interest in monasticism. As a reformed minister (albeit female!!) I celebrate many of our "desert"parents liturgies and symbols in a reformed context. BUT, I think the challenge - especially in South Africa - is to "translate" the old monastic lifestyle and not duplicate the old monasticism. The challenge for us is a public theology, and I am afraid, the "old" monastic way is not going to be of use.

You response raises many questions, including some quite fundamental ones. You say "I am afraid, the "old" monastic way is not going to be of use."

And the questions that raises, for me, at least, are: of use for what and to whom? And is utility the sole criterion of value?

It seems to me that the Reformed tradition abandoned monasticism almost from its inception, and so trying to even apply the "old" monasticism" to it would be like trying to put a new patch on an old garment.

After reading your response, and writing my own comment, I discoverred that someone else had dealt with almost the identical topic here: the need for monasticism. I think that too is worth a look.

I think Steven raised some important issues here. Utilitarian thinking as a primary directive has inherent dangers, as it assumes we can manufacture the results of what is Divinely ordered and willed. As a different input, suffering is as uni-utilitarian as it comes, yet produces immense fruit. Utilitarianism is a hangover from modernism, and we need to realise that. Our thinking and reasoning should be Christ-infused. Of course, practical concerns are important, and should be kept in mind, but as I said above, it cannot be a prime directive.

Perhaps one could add on to the "utilitarian" problem the allied matter of "pragmatism" (the only original philosophical idea birthed in the USA).

A look at the way the apostle Paul approached theology and praxis might be in order. In some areas of praxis Paul takes a pragmatic line (like having to circumcise Timothy when his epistle to the Galatians made it clear what he thought of Judaizing tendencies in Christians).

However his theology is not so shaped by pragmatism but rather intersects with: the existing revelation of God in the law, prophets and writings, and in the incarnation of Christ. He receives a tradition handed down (1 Cor 15 "now brethren I hand on what I received.."). He is inspired by God's Spirit to write and his reflections on context become the grist for the mill from which his theology emerges.

In other words Paul is reliant on pre-existing material that is foundational to what he develops. He is not involved in a mix and match of things he likes from the OT to the exclusion of "inconvenient truths" found there. What is "new" is his backwards glances on the tradition are now invigorated and deepened and enlightened by the revelation of God in Christ.

The neo-romanticism among some Protestants about revamping monasticism does not seem to be at the moment grounded in any deep understanding of the theology, tradition and praxis of either the Orthodox or Catholic monastic ways.

In this respect the utilitarian component seems to be in some cases driven by a "me-first" need for depth. When it leaves the "me" and becomes "I and thou" pragmatism and utilitarian principles are in the DNA mix. The problem is that pre-existing material is read a-historically (not in its original setting), but open-cut mined for interesting bits.

It does seem to be a reflexed or hard-wired response now to mix and match elements from theological and orthopractic materials in the hope of reinvigorating a personal and then perhaps some quasi-communal spiritual life. If you wish this habituated response about theology and praxis is analogous to the spot, hop and shop mouse-clicks made when one surfs internet sites. That can lend itself to novelty but can also vitiate context and lead to shallowness or superficiality.

If the serious pagans are recalled as complaining about "fluff-bunny pagans", perhaps there is a parallel problem of serious monastics and "fluff-bunny monastics"?? It is something to reflect on and hopefully discernment will prevail so that fluff and ephemerality gives way to depth and maturity and substantive content.

Thanks very much for your thoughtful comments. You raise a lot of other thing, some of which are perhaps best responded to in a new post, rather than a comment following an existing one. For that, I've posted the concluding chapter of my doctoral thesis, which deals with the premodern-modern-postmodern thing, and also the issue of eclecticism, where I tend to take issue with Matt Stone. I make a distinction between being eclectic and eclecticism.

I (and others) have borrowed from many different Orthodox traditions, and we hope that an authentic southern African Orthodox tradition will eventually emerge from this. But we try not to remove them from their roots. We are indeed eclectic, mixing different styles of music, like Russian, Arabic and Byzantine. But eclecticism, it seems to me, rips symbols from their context, and reinterprets them in a radically individualised sense.

And the old monasticism originated in Africa, and perhaps it needs to spread to other parts of the continent from those where it had its beginning. I think that there may well be a need for a new monasticism, but that it will need to be rooted in the old, and in relation to the old.