Perhaps it is no more than coincidence, but it struck me today that outbreaks of xenophobic violence seem to coincide with Eskom's load shedding.

The last time there was serious and prolonged load shedding was in January 2008, and in February 2008 there was xenophobic violence in Mamelodi. It spread to other places, like Atteridgeville in April, and I blogged about it here: No bread, no matches, no candles — thanks to xenophobia | Khanya.

But it was only when it reached Johannesburg in May 2008 that the media began to pay serious attention to it.

This time around there has been load shedding since January, and there seems to be a similar rise in xenophobia. But perhaps it's just coincidence and nothing more.

Streams of posts and information on the xenophobic attacks around the country leave me with a sense of rage. The question is how can we be peacemakers when our policies favour the rich and we see our national leaders and big business become richer and richer


I questioned that, because I think that rage is the very thing that is driving xenophobic violence. My friend responded by saying that we should look at our own complicity. Aye, there's the rub.

A few weeks ago a friend of mine, Artemius Mangena, was shot by robbers and spent some weeks in hospital. He mentioned that he overheard the robbers speaking Shona, and I felt an instant surge of rage -- xenophobic rage. There's my complicity. Sometimes it doesn't surface as rage, but as mere prejudice, as when I was introduced to a Nigerian, and my first thought was "drug dealer". Complicity again. Artemius, from his hospital bed, told me he didn't blame anyone for what had happened to him, but prayed for them, and I was reminded of my complicity again.

Here's a photo I posted in the article referred to above, which shows Artemius (in the green shirt).

The photo was taken soon after the 2008 xenophobic violence in Atteridgeville.

The rage works the other way too -- another friend (Malawian) was arrested just outside the block of flats where he lived, and the cops would not let him go up to his flat to get the documents to show he was in the country legally. Shades of the old pass arrests -- so much for "transformation". He was only released when a friend went along to the police station and paid a R1500 bribe. Anyway, I said most of what I want to say about xenophobia last time around, here:

What can we do about it?

Christians can talk about xenophobia, preach and teach about it, and remind people that xenophobia is a sin that needs to be confessed. For Orthodox Christians a good opportunity to do this will be on Sunday 10 May, the 5th Sunday of Pascha, which is the Sunday of the Samaritan woman. Some possibilities are suggested here:

And then there's this: 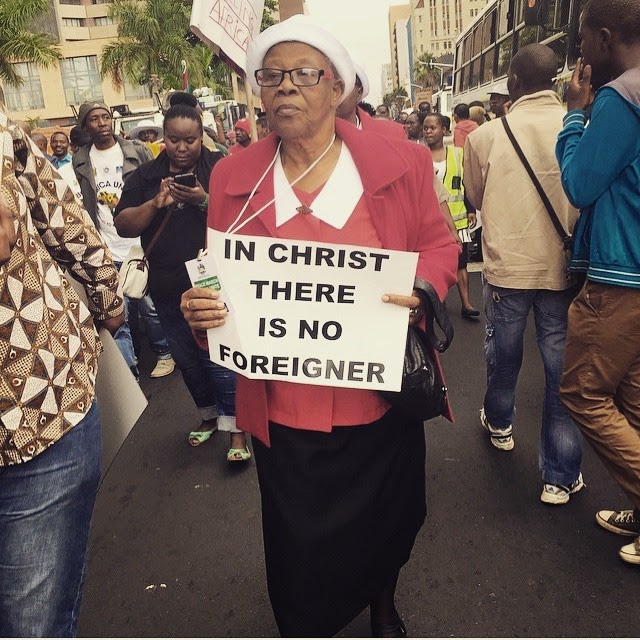